Re-blog: How Sloane Peterson from Ferris Bueller's Day Off Taught Me How to be a Good Girlfriend 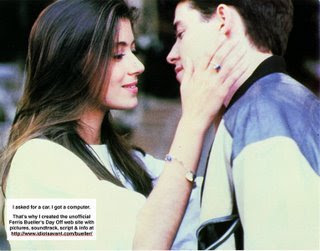 Hi all. I just had to share this amazing blog entry from "No, they don't let me lick the bowl," in which blogger Laura explains how Sloane from Ferris Bueller can teach us to be better girlfriends. I think it's pretty spot-on, and most of my guy friends (including my man) have agreed. What do you think?

THE GUIDE TO BEING SO CHOICE aka How Sloane Peterson from Ferris Bueller’s Day Off Taught me how to be an Awesome Girlfriend.

Posted by Jessica Ferri at 1:31 PM

This is by far one of the best things I've read all day. =)

it's pretty fantastic, isn't it? and true!

Jessica Ferri said...
This comment has been removed by the author.
5:55 PM

So she's headed straight to my sidebar and so are you. What a great post. Can't wait to see what else you have.

Now what is this "No they don't let me lick the bowl" of which you speak? My Google skills are evidently not very "choice" just now...

Thanks for posting, I really enjoyed your most recent post. I think you should post more often, you obviously have natural ability for blogging!

hey! Snobber, I just google searched this. I'm the laura who wrote this, thanks for not only enjoying what I wrote but also giving me credit! Love your blog :)